How does one determine sMin and sMax when adding a worker via PRB? It seems one has to enter the stake amount ‘blind’ on the PRB add worker screen, I see no way to determine sMax when using PRB.

Longer version of the question:
In contrast to PRB, when adding workers via the Phala App, step #1 is add worker then step #2 is clicking ‘Start’ where one can then see the sMin and sMax which informs how much stake can be assigned to the miner at the Start-miner step.
Unfortunately, when adding workers via PRB there appears to be no way to determine sMin and sMax because adding the worker, setting the stake and starting the worker appear to be one step. 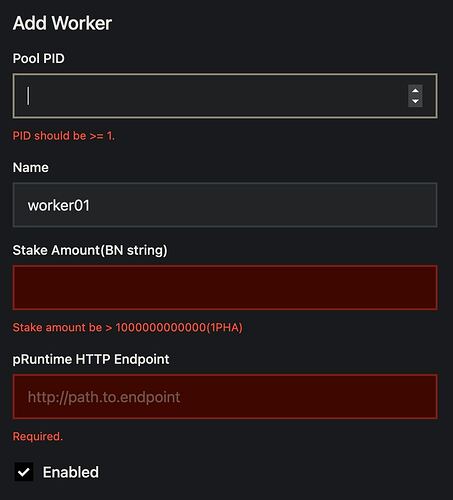 I’ve read the tokenomics and staking mechanism several times and this issue isn’t covered, while it may be from a theoretical level, a miner is limited to what is built into the UX of PRB unless it’s expected that miners would modify the PRB code to make it usable, which then unnecessarily raises the bar to mine. I believe the more miners, the more delegators, the higher the price of Pha will be.

Unless its intentional to limit PRB miners to limit competition, lets get this information more widely available and improve the documentation. Once I get through this hurdle, I’ll happily publish docs on all this for the community.